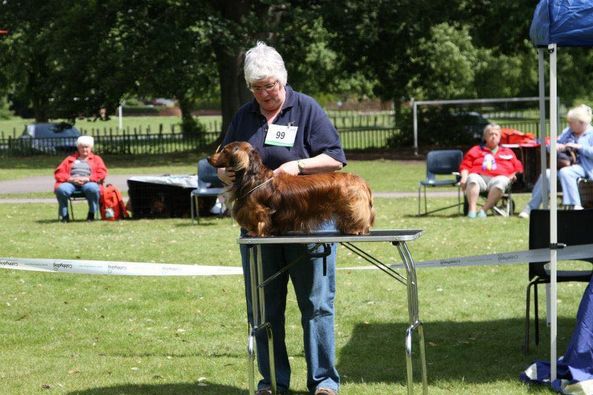 It is with deep sadness that Dachshund Rescue has to announce the passing of our Chair for many years, Christine Furneaux.

Founded in 1972, Dachshund Rescue was the result of the collaboration of several Dachshund breed clubs.

She was a very proactive lady, nothing stood in the way of what she wanted to achieve in her life!

It was the beginning of Dachshund Rescue as we know it today.

At this time Chris also initiated and managed the amalgamation of Daxaid and Dachshund Rescue.

Covering the whole of the UK, we now have; 4 Trustees, 14 Co Ordinators , over 40 volunteers, a team of mobile physiotherapists and a Dachshund trainer.

We have also established working relationships with various referral clinics across the UK. In 2021 the Charity found forever homes for 190 Dachshunds

The amount of energy and dedication Chris had for the welfare of Dachshunds was tremendous, and she grew a very successful charity over many years.

She was an extremely determined lady with very strong values and ethics which she instilled in each and every member of the Charity.

These values remain in place today and we are all very proud to honour these vital components which are instrumental in the rehoming work that we do.

Chris had a great love of Lawn Bowls which she attended two mornings a week for many years. Nothing interfered with her bowling mornings and the socialising that went with them.

We all quickly learned which mornings were bowls mornings. There became an unspoken rule that Chris was not to be disturbed at these times!

Wildlife was a great love of Chris’s and whilst sat at her desk for many hours carrying out the rescue work, she would watch a special little bird that sat on the hedge outside her study, watching her.

The last few months prior to Chris stepping down as Chair of Dachshund Rescue saw the beginning of the pandemic. This brought in a massive change in the way we would work to rehome Dachshunds.

This she did with great aplomb, as always leading her team successfully through these unprecedented times.

She was however, not a great fan of technology, and as our meetings could no longer be face to face, we all had to get to grips with Zoom.

Chris found this very frustrating to say the least but her determination to master the situation resulted in a very strange login to our first Zoom meeting, culminating in us all pulling her leg that she was using a stolen IMac!

She roared with laughter and from then on we all had great fun with her adapting successfully to Zoom life.

Due to ill health, Chris stepped down from Dachshund Rescue in December 2020.

The knowledge and experience of Dachshunds Chris possessed was enormous. We feel very privileged to have worked with her.

Chris will be hugely missed and the Dachshund breed has sadly lost a great Ambassador.

We aim to provide loving and permanent homes for Dachshunds whose owners, for whatever reason, can no longer keep them.

We offer 5 weeks free insurance with all our adopted dogs.

This website uses cookies to improve your experience while you navigate through the website. Out of these cookies, the cookies that are categorized as necessary are stored on your browser as they are essential for the working of basic functionalities of the website. We also use third-party cookies that help us analyze and understand how you use this website. These cookies will be stored in your browser only with your consent. You also have the option to opt-out of these cookies. But opting out of some of these cookies may have an effect on your browsing experience.
Necessary Always Enabled
Necessary cookies are absolutely essential for the website to function properly. This category only includes cookies that ensures basic functionalities and security features of the website. These cookies do not store any personal information.
Non-necessary
Any cookies that may not be particularly necessary for the website to function and is used specifically to collect user personal data via analytics, ads, other embedded contents are termed as non-necessary cookies. It is mandatory to procure user consent prior to running these cookies on your website.
SAVE & ACCEPT